Before 9/11, there was Pearl Harbor. A remembrance ceremony of the "Day Which Will Live In Infamy" will be held Saturday, December 7, 2019 at noon. The service will be held at Vermilion's South Street Boat Launch off West River Road. 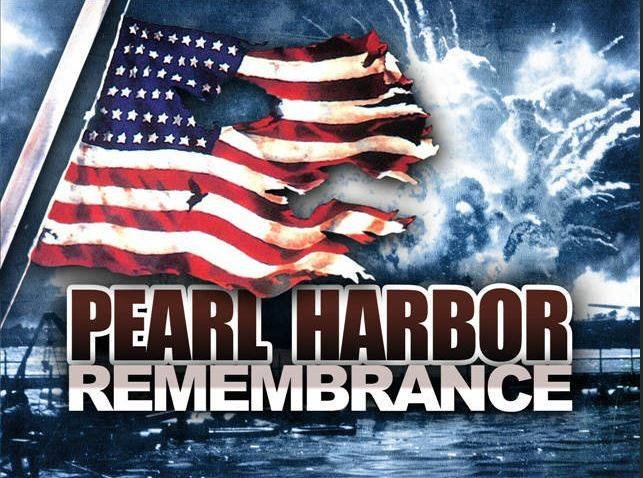 Sponsored by the Vermilion Veteran's Council and President Angus Bartlett, the observance is scheduled to be a brief 15 minutes.

On December 7, 1941, Japanese planes attacked the United States Naval Base at Pearl Harbor External, Hawaii Territory, killing more than 2,300 Americans. The U.S.S. Arizona was completely destroyed and the U.S.S. Oklahoma capsized. A total of twelve ships sank or were beached in the attack and nine additional vessels were damaged. More than 160 aircraft were destroyed and more than 150 others damaged.

A hurried dispatch from the ranking United States naval officer in Pearl Harbor, Admiral Husband Edward Kimmel, Commander in Chief of the United States Pacific Fleet to all major navy commands and fleet units, provided the first official word of the attack at the ill-prepared Pearl Harbor base. It said simply: AIR RAID ON PEARL HARBOR X THIS IS NOT DRILL.

The following day, in an address to a joint session of Congress, President Franklin Roosevelt called December 7, 1941 “a date which will live in infamy.” Congress then declared War on Japan, abandoning the nation’s isolationism policy and ushering the United States into World War II. Within days, Japan’s allies, Germany and Italy, declared war on the United States, and the country began a rapid transition to a wartime economy by building up armaments in support of military campaigns in the Pacific, North Africa, and Europe.

Also on the day following Pearl Harbor, Alan Lomax, head of the Library of Congress Archive of American Folk Song, sent a telegram to colleagues around the U.S. asking them to collect people’s immediate reactions to the bombing. Over the next few days prominent folklorists such as John Lomax, John Henry Faulk, Charles Todd, Robert Sonkin, and Lewis Jones responded by recording “man on the street” interviews in New York, North Carolina, Texas, Washington, D.C., and elsewhere. They interviewed salesmen, electricians, janitors, oilmen, cabdrivers, housewives, students, soldiers, physicians, and others regarding the events of December 7. Among the interviewees was a California woman then visiting her family in Dallas, Texas.

“My first thought was what a great pity that… another nation should be added to those aggressors who strove to limit our freedom. I find myself at the age of eighty, an old woman, hanging on to the tail of the world, trying to keep up. I do not want the driver’s seat. But the eternal verities–there are certain things that I wish to express: one thing that I am very sure of is that hatred is death, but love is light. I want to contribute to the civilization of the world but…when I look at the holocaust that is going on in the world today, I’m almost ready to let go…”

The Office of War Information (OWI) capitalized on the fear and outrage associated with the bombings to encourage support of war mobilization. Created In June 1942, some six months after the air raid on Pearl Harbor, the OWI served as a U.S. government propaganda agency generating pictures and copy of Pearl Harbor widows. Concentrating on subjects like aircraft factories, training for war, women in the workforce, and the armed forces, the OWI documented and celebrated American patriotism in the military and on the home front.

On August 23, 1994, the United States Congress designated December 7th of each year as National Pearl Harbor Remembrance Day. All American flags should be flown at half-staff until sunset honoring those who lost their lives as a result of the attack on the U.S. Military and naval forces in Hawaii.